Bitcoin looks to retest $60K: Here’s why it could surge higher

Bitcoin looks to retest $60K: Here’s why it could surge higher

Bitcoin price has rebounded off support near $56,500 and could see fresh gains towards $60,000

Over the weekend, Bitcoin (BTC) price decreased to lows of $56,487 after bulls failed to sustain the upside seen on 2 April. After reaching highs of $60,066 on Friday, BTC experienced a sharp retreat and broke below major support at $58,000. The negative price action even saw bears revisit the critical $56,000 zone, with prices touching $56,450 on some exchanges.

The benchmark cryptocurrency, which has maintained a $1 trillion market cap for over a week now, has bounced higher over the last 24 hours. Prices are now above $58,500 and could retest $60,000 if bulls maintain an upside advantage over the next few days.

Why Bitcoin price could surge higher

There is a bullish sentiment around Bitcoin, with recent market data suggesting the cryptocurrency is prime for a new rally.

Glassnode’s ‘Week on Chain’ report released yesterday suggests that Bitcoin could surge even higher given its performance over the last ten days. According to the analytics platform, BTC maintaining a $1 trillion market cap for ten straight days “is a strong vote of confidence for Bitcoin and the cryptocurrency asset class as a whole”.

Notably, bulls have been aggressive on every dip since prices broke above $50k. The result is a strong support level that is seeing massive accumulation among miners, suggesting confidence that prices will rally again. Besides, there hasn’t been a slowdown in institutional buying, with MicroStrategy adding $15 million worth of BTC to its holdings.

According to Santiment, buy calls have reached a three-week high and it could see further gains as was the case on 13 March.

“Bitcoin has rebounded back above $59k, and polarizing opinions have spiked. Debates rage on about another #ATH approaching. #Buy calls are at a 3-week high, and the last occurrence of mentions being this high was just hours before the March 13th #ATH”, Santiment noted. 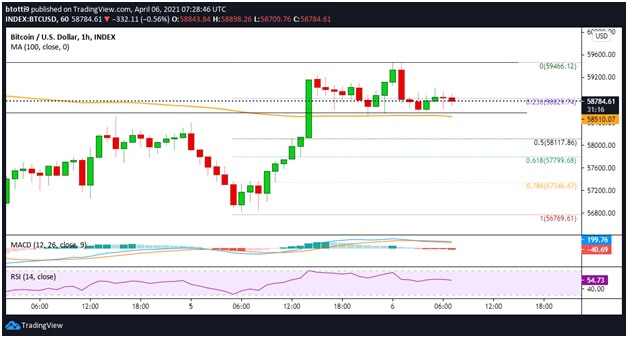 BTC/USD is trading below a horizontal resistance line that has capped the latest rebound near $59,500. Prices have broken below the 23.6% Fibonacci retracement level of the move from $56,700 to $59,457. Although the MACD is increasing within the bearish zone, the hourly RSI remains above 50 to suggest prices are likely to swing within the range of $58,800—$58,200.