Tron was one of the biggest performers amongst the leading cryptocurrencies over the past 24 hours. The cryptocurrency broke into the top 20 by market cap after surpassing VeChain (VET) and now has a market cap of over $6.5 billion.

TRX continued its extended rally and is now up by over 60% in the past week. If the current uptrend continues, then TRX could soon hit the $0.1 mark and most likely overtake Dogecoin in the market cap ranking.

TRX has been bullish over the past week, and it doesn’t seem like slowing down. A look at the TRX/USD 4-hour chart shows it is way above its 100-day simple moving average at $00.061. After rallying to $0.097 yesterday, the pair slipped but was held by strong support at $0.84. Thus, allowing it to push higher over the past few hours and the pair is now trading above the $0.91 mark again. If TRX can continue in this bullish state, it would likely break past the next psychological barrier at $0.10. 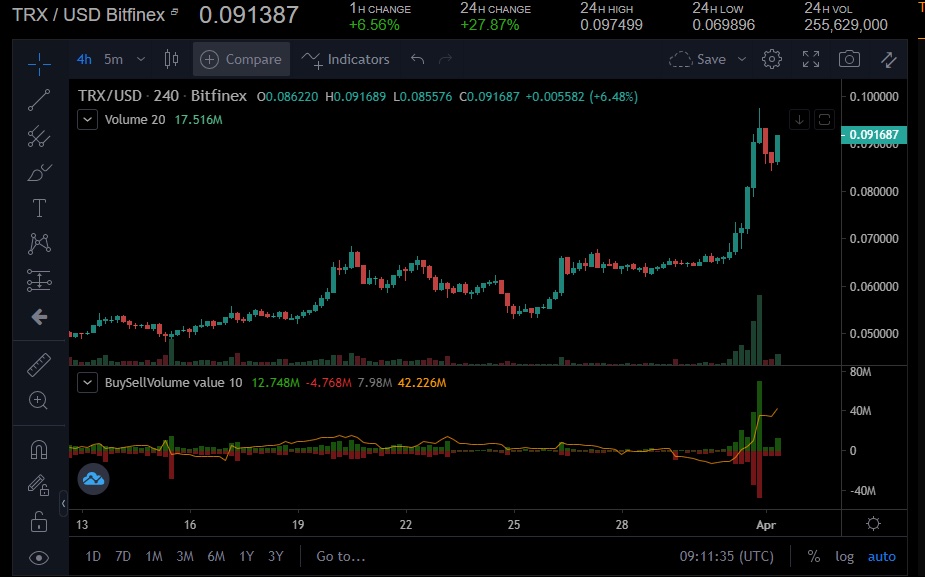 Tron is still far away from reaching its all-time high ($0.207349) achieved three years ago. However, if the current rally is sustained, it could reduce the deficit by half. The RSI at 76.39 is clearly in an optimistic state, indicating more traders are buying the cryptocurrency. Its MACD has been in the green region for the past few days following an extended market rally.

On the downside, failure to break past the $0.1 mark could trigger sell-off from traders, and the cryptocurrency could decline to the 20-day exponential moving average ($0.07608).

TRX’s rally over the past 24 hours could be due to DuckDAO’s announcement that its service will now be available on the Tron blockchain. DuckDAO is a digital assets incubator that helps promising projects reach their potential.

Thanks to the partnership, all Tron projects can take part in the DuckDAO community. DuckDAO was initially launched on the Ethereum blockchain, but it is also available on the Binance Smart Chain and Polkadot.