Monero has been rallying over the past few days and is primed to retest its 30-day high price of $243.

The general cryptocurrency market has been rallying over the last 24 hours, and XMR was one of the beneficiaries. Bitcoin surged to the $58k mark, and most of the leading cryptocurrencies were carried along with it, including Monero.

After trading at $241 per coin yesterday, the privacy-based cryptocurrency has cooled down, but could be looking to retest the $243 mark again.

XMR rose from a low of $232 to a high of $241 over the past 24 hours. Its performance was likely sparked by the general market upsurge. Despite dropping to $236 at the time of writing this report, the XMR/USD pair could be retesting the $243 mark very soon.

A look at the XMR/USD 4-hour chart shows that the cryptocurrency is trading way above its 100-day simple moving average. XMR seems to have established support at $234 after the bears failed to drag it down below that level. With strong support in place, Monero could be looking to break past the resistance point at $240 and attempt to reach its 30-day high of $243. 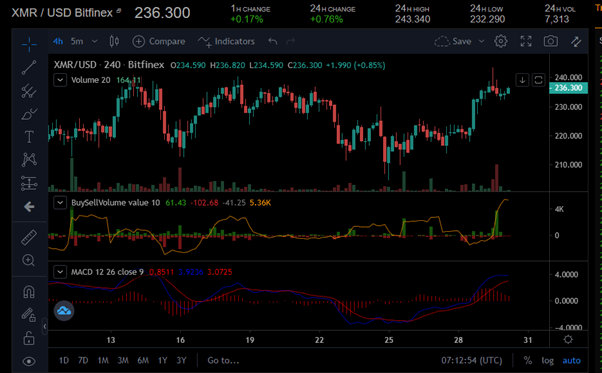 However, if the current trend is broken, then the XMR/USD pair could crash below $230 towards the next support at $227. The MACD is trading in the green region, which means the bulls are still in control with an RSI of 67.25. This figure is still fairly neutral though, so control could still shift to the bears.

Visa announced yesterday that it would settle transactions on its network using USDC stablecoins on the Ethereum network. By doing so, Visa has become the first major payment platform to adopt stablecoins for transactions.

The news listed the cryptocurrency market, with Bitcoin rallying from $55k to reach $58k within a few hours. Other leading cryptocurrencies such as Ethereum, XRP, Cardano (ADA) and Polkadot (DOT) all recorded impressive gains over the past 24 hours.