Bitcoin and Ethereum prices recovering after a week-long drop

Bitcoin and Ethereum prices recovering after a week-long drop 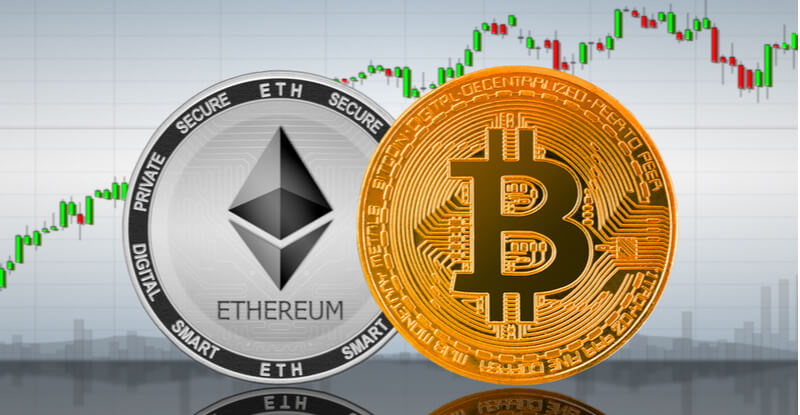 On March 26th, over $6 billion worth of Bitcoin options contracts expired. However, over the past week, as the expiration approached, traders feared that a massive drop in BTC price will damage their funds, so they started selling, causing a price drop as a result. And, with Bitcoin’s overwhelming dominance over the crypto industry, most coins ended up following suit, including Ethereum.

The expiring BTC options were one of the biggest topics for days, but now that they have expired, traders started looking ahead again and seem optimistic about what they see. A new set of April contracts indicates that options traders expect a major new surge — one that will result in a new ATH. In fact, the contracts suggest that Bitcoin might soar to $80k next.

It appears that institutional investors are also feeling positive about the future of Bitcoin, as they continued buying the coins despite the recent price dip, that took BTC down by 14%. Financial institutions believe that there is about to be a surge in interest, as retail wealth management companies are starting to offer Bitcoin to their clients. The move mirrors what Morgan Stanley did recently, and indicates that crypto adoption is continuing to flourish.

However, one investor fears that the US government might decide to put a stop to it. Ray Dalio recently warned that the government might move to ban Bitcoin, just as they did with gold nearly a century ago, back in the 1930s.

For now, however, there are more and more things that BTC holders can do, such as buy a new Tesla, according to Elon Musk’s recent announcement. Musk said that Tesla will now officially start accepting Bitcoin payments for their electric cars.

Interestingly enough, Ethereum’s price has been recovering also, despite a recent piece of bad news. Namely, Ethereum’s upcoming scaling solution, Optimism, was supposed to go live this week, until developers announced that it will be delayed. Now, they believe that the mainnet will not be able to launch before July of this year. The fact that Ethereum price is recovering despite this news can only indicate that the second-largest crypto is following Bitcoin’s lead.

BTC and ETH prices on the rise

As mentioned, this was a difficult week for Bitcoin and Ethereum, at least until yesterday, when prices finally started to rise again. According to CEX.IO data, BTC dropped from a weekly high of $58,417 to $50,500 in only three days. After the contracts expired yesterday, however, the price surged again, reaching $55,518.

Ethererum’s chart looks fairly similar, with a gradual decline between March 22nd and March 24th, followed by a sharp drop late March 24th, from $1746 to $1549.

Since then, the coin started seeing recovery that took it to $1717, before a minor correction.

What is coming next for BTC and ETH?

Originally, I expected Bitcoin to hit $50k per coin by the end of Q1, which is on March 31st. For a long while, it appeared that the coin has seriously overperformed and that it might end the quarter significantly higher. The drop caused by the expiring options then hinted that the forecast might be correct after all, only for the price to start correcting and once again head towards $60k.

However, judging by the new set of contracts, it might be that the forecast regarding Q2 might still hold, as Bitcoin’s stock-to-flow model did indicate that the coin will end the quarter at $80,000 per coin. Of course, there are still months before we reach that point, and a lot can still happen in the meantime.

Ethereum has overperformed also, as I expected it to be at $1,300 by the end of the first quarter. However, the coin sits at $1687 at the time of writing, which is significantly higher, and it promises to move even further up in days to come. As for Q2, I expect to see it hit $2,200. After that, I expect an even larger surge as developers continue down their way to ETH 2.0 upgrade, with the coin ending the year at $4,900.