XRP price targets a fresh rally towards the monthly high of $0.60

XRP price targets a fresh rally towards the monthly high of $0.60

XRP has resumed its upward movement following last weekend’s slump. The XRP/USD pair is currently up by 1.35% over the past 24 hours despite a mixed performance from the general cryptocurrency market.

If the current trend continues, the cryptocurrency could be targeting its 30-day high of $0.60.

XRP has been trading in the green for the past 24 hours and is one of the best performers amongst the top 10 cryptocurrencies by market cap. The cryptocurrency began its recovery after slipping to a low of 0.53913. 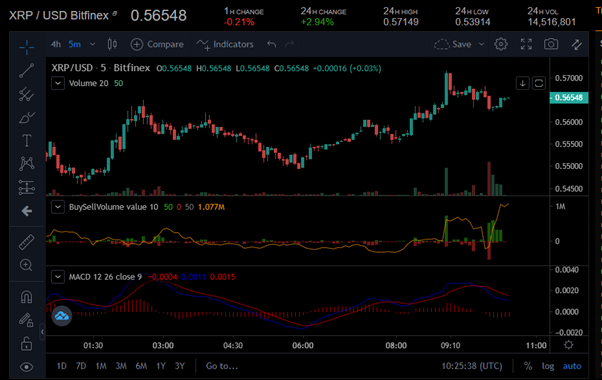 XRP’s MACD is trading in bullish territory. Its RSI currently stands at 57.56, a relatively neutral position, yet seemingly on the rise. If the RSI can move beyond 80, then XRP would enter a bullish mode, and it could rally past the $0.60 line of resistance.

However, failure to break past the next psychological point at $0.57 could see XRP lose steam and decline back towards $0.53.

According to data from XRPscan, Ripple Labs co-founder Jed McCaleb has moved 127 million XRP coins to be sold. This means that he has sold a total of  $71 million worth of XRP over the past few weeks. McCaleb now has 336 million XRP remaining in his “tacostand” cryptocurrency wallet.